After the National Bison Legacy Act passed unanimously in both the House and the Senate, President Obama signed a bill into law declaring the American Bison as our national mammal on Monday, May 9, 2016. This is the first national mammal of the United States. 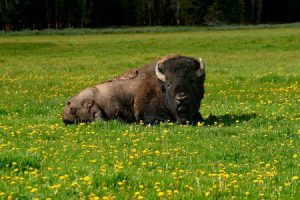 The US Department of the Interior writes that, "This majestic animal joins the ranks of the Bald Eagle as the official symbol of our country -- and much like the eagle, it’s one of the greatest conservation success stories of all time." Here in Big Sky, we're excited that the national mammal is one we see regularly.

Tens of millions of bison used to roam from Alaska to Mexico until they were over-hunted and massacred. President Teddy Roosevelt set in place strict conservation efforts to save the bison after the animal almost went extinct in the 1800's. By 1894, there were fewer than 1000 bison left. Today bison can be found in all 50 states. There are approximately 30,000 wild bison and over half a million bison on ranches and Indian reservations (Uproxx.com).

The WashingtonPost.com quoted Rep. Lacy Clay of Missouri, who sponsored the bill, as saying "The American bison is an enduring symbol of strength, Native American culture and the boundless western wildness." Commonly called the buffalo, the American bison is the largest mammal native to North America. These creatures can weigh up to 2000 pounds and stand 6 feet tall. They can run up to 35 MPH. Bison typically roam in herds and played an important role in American history. Now they will be remembered forever as the national mammal. 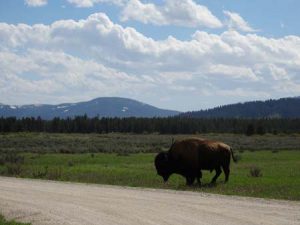 Bison are fantastic creatures and it's exciting to see an animal that's so prevalent in Big Sky country be named the national mammal. These creatures look cute and cuddly, but please always respect these wild animals. Every year people are gored by wild bison when they get too close. Be careful and respect bison everywhere.

And for those of you that were wondering about the bald eagle… Don't worry. The bald eagle is still the national animal. And guess what? You can see those in Big Sky country too!