Picture this: You're on a leisurely hike with your dog in Beehive Basin. As you round the corner on this popular trail, you find yourself face-to-face with a massive grizzly bear. Yikes! What are you going to do?

If you are heading into Big Sky's backyard, you need to carry bear spray. Big Sky is part of the Greater Yellowstone Ecosystem, which means it's grizzly country. In the event of a bear encounter, you're going to want bear spray.

According to NPS.gov, there were 717 grizzly bears in the GYE in 2015. Always be bear aware when you're hiking, biking, camping, backpacking, fishing, or enjoying the great outdoors around Big Sky. You never know where you might spot a grizzly.

NPS.gov outlines several rules to follow in bear country to reduce your risk of an encounter:

Even when you follow all of the rules, grizzly encounters still occasionally happen. In the unfortunate and scary situation when you encounter a grizzly, you're going to want bear spray. Bear spray is a safe, effective, and easy method to deter a charging bear. 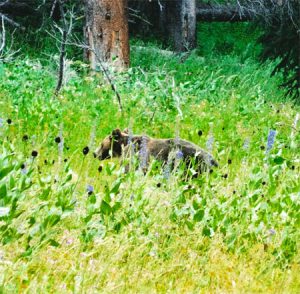 Bear spray is like a super mace derived from hot peppers that is designed to be used in grizzly bear encounters. It is commercially available at many retailers in Big Sky.

FYI: It's not like bug repellent. Instead it is used like mace when a grizzly encounter occurs. When accurately sprayed at a grizzly bear the wide mist will burn the bear's eyes and nose and ultimate deter the bear from attacking.

According to a study featured on FieldAndStream.com, "Bear spray, when properly used, halted aggressive bear behavior in 92 percent of the cases. Of the 175 people involved in the bear-spray encounters, only three were injured and none required hospitalization." By comparison, "the use of firearms in hundreds of bear encounters shows that bullets deterred a charge just two-thirds of the time, and that it takes an average of four shots to stop a bear."

Bear spray is an effective defense tool to carry with you in the backcountry. When used properly it has the potential to save your life. Always carry bear spray when you're adventuring around Big Sky. Take the time to read the directions and practice with bear spray before you need it.

It's your responsibility to be bear aware, carry bear spray, and know how to use it properly. Keep it easily accessible at all times when you're in the backcountry. We encourage you to learn more about bear spray on HowStuffWorks.com.