If you've ever visited Big Sky, Montana or you've kicked back and enjoyed the Hollywood hit A River Runs Through It, you're familiar with the mighty Gallatin River. It's one of the most spectacular rivers you'll ever see.

The Rivers Of Big Sky Country Are World Class

The Gallatin River flows out of Gallatin Lake in the northwest corner of Wyoming. Located deep in Yellowstone National Park, Gallatin Lake sits at 8850', just below the north face of the Three Rivers Peak at 9,764' in elevation. From this remote point in the United States' oldest National Park, the mighty Gallatin River begins its 115 mile journey to Three Forks, Montana. The river ultimately joins the Madison River and Jefferson River to form the Missouri River at roughly 4050'. 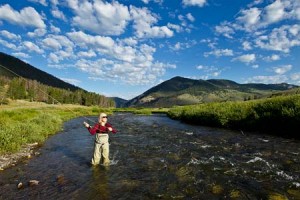 During the Gallatin's 4800' foot descent through Wyoming and Montana, it changes from a meandering stream to snowmelt fueled whitewater to a broad and lazy river. As a freestone river, the Gallatin is completely natural. Its flow depends on weather and snowfall. The river begins with meandering channels flowing north out of Gallatin Lake though Yellowstone National Park. It then begins to parallel Highway 191 near Bighorn Pass TH and continues collecting water as it flows toward Big Sky.

Once the Taylor Fork joins the Gallatin, the river increases in size. When it enters into the Gallatin Canyon, it turns into one of the best whitewater rafting rivers in the region. Navigating through the Gallatin Canyon, the river whips alongside Highway 191 under towering peaks like Storm Castle. Highway 191 features many pullouts and trail-heads that provide easy access to the river. Just drive down the road and you'll be able to see why the river generates the amount of traffic that it does.

As the canyon opens up, the river settles down and turns into a broad, lazy river that flows through the fertile valleys west of Bozeman. Ultimately it joins the Jefferson and the Madison and continues flowing as the Missouri enroute to the Mississippi and the Gulf of Mexico.

4 Types Of Fish You Can Catch In The Gallatin River 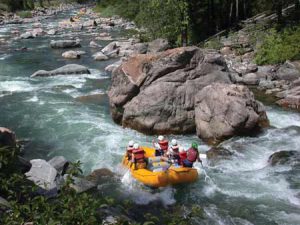 For years, the Gallatin was only enjoyed by Native Americans, trappers, hunters, mountain men, homesteaders, and a few travelers. According to GallatinRiverTaskForce.org, this changed in 1911, when Highway 191 was completed and finally connected Big Sky to West Yellowstone. This main thoroughfare wasn't paved until 1951 and still sees regular improvements almost every summer.

Today the mighty Gallatin River is a true recreation hub for anglers, hikers, and rafters. Due to its easy access from mountain towns like Big Sky and Bozeman, people are keen to explore the lifetime of adventure that the river offers.

Whether you're rafting the Mad Mile, hucking back flips off the Green Bridge, fly fishing the Blue Ribbon waters, or heading to Yellowstone National Park, you'll enjoy the wild Gallatin. To make the most of the Gallatin, hire a fly fishing guide or book a whitewater trip with a local outfitter. These river professionals will share tales and swap stories about the Gallatin that are way better than what you'll read on the Internet.

Come and experience the Gallatin River. Once you spend a day on the Gallatin, you'll understand why Big Sky is a year-round, world-class destination.

Information for this blog post came from the following sources: