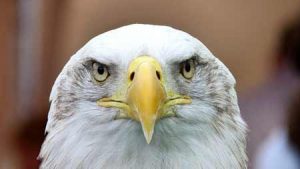 In 1782, the Second Continental Congress declared the bald eagle the National Emblem of the United States. As the national bird and the mascot of the USA, the bald eagle is easily the most iconic and identifiable bird around.

After a severe population decline, the eagle became protected under the Bald and Golden Eagle Protection Act of 1940. Since then, bald eagles have thrived in their native habitat of North America - especially in Montana and the Greater Yellowstone . In 2007, the bald eagle was removed from the federal list of Threatened and Endangered Species in the Lower 48. Today, bald eagles are a common sight in Big Sky Country and across the Treasure State.

Bald eagles live in Montana all year long, but the best time to spot one is during the Fall. As bald eagles migrate south from Alaska and Canada in search of food and warmer temps, the Montana population increases. Keep your eye peeled in forested areas near rivers and lakes and you'll likely spot a bald eagle or two.

Let's take a look at some interesting facts about bald eagles:

There's something special about spotting a bald eagle in the wild. As the symbol of the United States, it's fun to spot these iconic and powerful birds soaring overhead while in Yellowstone National Park or swooping down on your favorite lake while you're fly fishing.

If you capture a cool wildlife photo of a bald eagle when you're in Big Sky Country or in Yellowstone National Park be sure to share it on social media with #visitbigsky.

Learn more interesting facts about bald eagles from these sources: