Bison are North America's largest mammal. On May 9, 2016 President Barack Obama signed the National Bison Legacy Act specifying the bison as the national mammal of the United States. 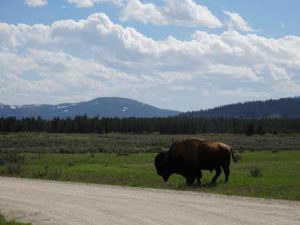 Approximately 400,000 years ago, bison crossed the land bridge from Asia to North America where they thrived and ranged from Mexico to Alaska. They were an important part of Native American culture. Then in the 1800's the bison herds of North America were hunted almost to extinction. At one point, there were less than 1000 bison left.

Due to strict conservation efforts started by President Theodore Roosevelt, the bison has seen a tremendous comeback. Today, bison live in all 50 states. There are nearly 30,000 wild bison and over half a million bison on ranches and Indian reservations.

Bison have always thrived in Yellowstone National Park. Yellowstone is the only place where bison have continuously lived since prehistoric times. Head to the Park from Big Sky and you'll likely see these majestic creatures in West Yellowstone (they sometimes sleep in the road) or inside Yellowstone's boundaries.

Let's take a look at some interesting facts about bison: 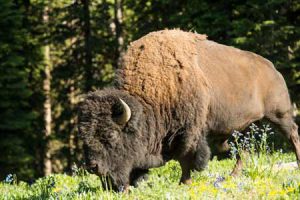 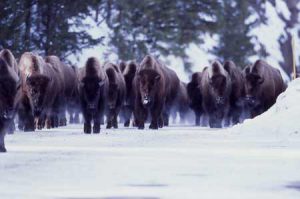 Our national mammal may look cute and cuddly, but it is a wild animal. Always give them the proper space. Bison can charge and gore people. Don't pet them or try to ride them. And please don't take selfies with bison either.

Learn more interesting facts about bison from these sources: