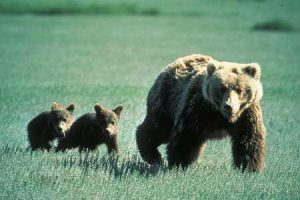 The grizzly bear is a majestic creature that inhabits western Canada and the northwestern United States. These large mammals are essentially the king of the animal world. They triumphantly sit at the top of the food chain. These omnivores have a fierce reputation, earning them the scientific name Ursus arctos horribilis.

The US Fish and Wildlife Service lists grizzly bears as a threatened species. In the past, approximately 50,000 grizzly bears roamed North America. That number dwindled significantly due to human interactions. After recent conservation efforts, there are approximately 1800 bears in the Lower 48 states.

National Geographic estimates that there are between 600 to 1000 grizzlies living in the 22.5 million acre Greater Yellowstone Ecosystem including Big Sky, Yellowstone, and Grand Teton areas. That means there are lots of grizzly bears in Big Sky's backyard!

Here are a few fun and interesting facts about grizzly bears to share with your friends: 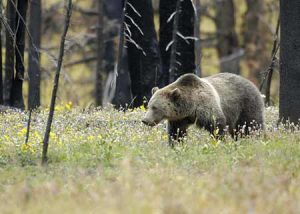 Grizzly in The Forest | Pixabay 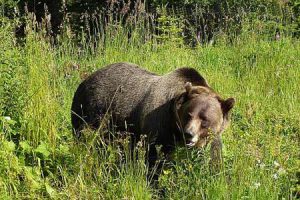 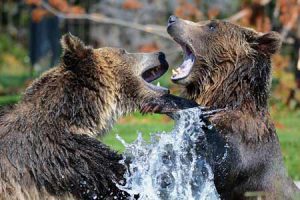 People explore bear country every day and encounters are rare. If you do encounter a grizzly bear in the wild, use extreme caution. Try to keep your distance. Avoid eye contact. Appear large. Back away slowly. Be prepared to use bear spray if necessary. Learn what to do in the event of a grizzly bear attack here and here.

Grizzly bears are frequently seen by humans in Big Sky country and there are rarely any issues. They can be spotted on the hiking trails, crossing the golf course, or wandering down the road in Yellowstone National Park. One fantastic place to safely see and learn about grizzly bears (and wolves) is the Grizzly and Wolf Discovery Center in West Yellowstone.

The interesting facts about grizzly bears in this post came from these sources: