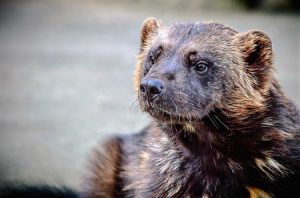 Wolverines are powerful, fierce creatures that live in remote and rugged mountain terrain. These legendary and solitary animals are relatively elusive, but they definitely exist in the mountains of Big Sky Country.

After wolverines almost went extinct in Montana in the 1900’s, the Treasure State is now home to the largest population of wolverines in the Lower 48. Wolverines, which are the largest terrestrial member of the weasel family thrive in the vast tracks of wilderness, forest service lands, and National Parks of this region.

Wolverines avoid human contact whenever possible, but a keen eye can spot their distinct tracks in the snow during the winter. If you’re lucky enough to see one, give it plenty of space because wolverines have a dangerous reputation.

Let's take a look at some interesting facts about wolverines:

If you capture a cool wildlife photo of a wolverine, be sure to share it on social media with #visitbigsky.

To learn more about Wolverines, read The Wolverine Way by Douglas Chadwick.

Learn more interesting facts about wolverines from these sources: